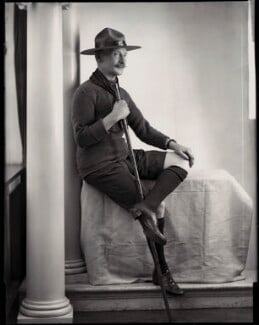 The acquisition in May 2004 of four original large format glass negatives taken by the Australian-born photographer H.Walter Barnett (1862-1934) provided the inspiration for the first comprehensive display of photographs of Baden-Powell from the National Portrait Gallery's collection. Many of the items appear here for the first time and give an iconographic context to the Gallery's remarkable 1903 portrait of Baden-Powell by Hubert von Herkomer also on show in Room 23. Apart from Walter Stoneman's 1927 photograph taken for the National Photographic Record all the other photographs shown here have been acquired in the last thirty years.

Robert Stephenson Smyth Baden-Powell was born on 22 February 1857 at 6 Stanhope Street, Paddington in London. He went to Charterhouse in 1870 before joining the army in 1876, being gazetted lieutenant in the 13th hussars, then stationed in Lucknow. He served in India and Afghanistan before winning fame serving in South Africa during the Boer War as the heroic defender of Mafeking during its 219-day siege that was relieved in May 1900. In recognition of his role he was promoted to Major General that year, being at 43, the then youngest holder of that rank. 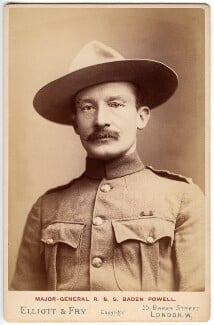 The timing of the Boer War coincided with a golden age of photographic portraiture. Sales of cabinet portraits combined with the demand for images from the new illustrated magazines, that could for the first time faithfully reproduce them in print due the invention of the half-tone reproduction, provided photographers with a financial windfall and a plethora of successful portrait studios. These images also appeared as photographic cigarette cards and a wide variety of printed ephemera. They vied in popularity with the stereo card, which with the help of a special viewer could provide a convincing three-dimensional record of life on the other side of the world. Lingley's portrait taken and published by Keystone was one of a huge number produced that documented soldiers on both sides during the Boer War.

In 1907 Baden-Powell was promoted to Lieutenant-General. During his army career Baden-Powell contributed sketches to the Daily Graphic and was the author of several authoritative books, starting with Reconnaissance and Scouting (1883) and followed later by works including his authoritative treatise Pig Sticking and Hog Hunting (1889). Building on the success of his book Aids to Scouting (1899) was his best-selling follow up Scouting for Boys (1908). This book, revised and updated over the years has come second only to the Bible for its volume of sales in all languages. An inaugural scout camp held in the summer of 1907 at Brownsea Island in Poole harbour, Dorset that lead to the official founding of the Scouting movement in 1908.

Baden-Powell married Olave St Claire Soames (1889-1977) on 31st October 1912. Though 32 years his junior, the marriage was happy and long lasting and produced three children. The young family grew up at Pax Hill in Bentley. Baden-Powell had purchased this property originally named Blackacre and renamed it and lived there until 1938. Baden-Powell's wife would become chief commissioner for the Girl Guides in 1916 and devote the rest of her life to the female equivalent of the Scouts.