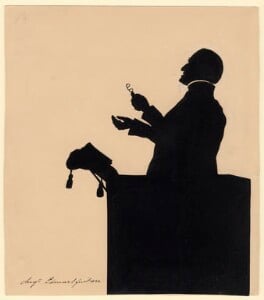 With the spread of silhouette portraiture came an inevitable decline in quality. It became associated with low grade mass-production and was shunned by fashionable society.
The term 'silhouette' to denote 'shadow portraits' had in fact first been coined as an insult. It referred to Étienne de Silhouette (1709-1767), the Controller General of France in the reign of Louis XV. After a series of harsh economic reforms, Silhouette's name became a popular synonym for penny-pinching and was similarly adopted for the inexpensive paper profiles he liked to cut in his spare time.

It was another Frenchman, Augustin Edouart (1789-1861), who rescued British silhouettes from a disreputable end. He came to England as a refugee and initially supported himself teaching French and making portraits from hair. Edouart cut his first profile as a challenge from friends but was reluctant to take it up professionally; I would not profess a shilling business or expose myself to be pointed out as a black profile taker and by those means be cut from society he wrote in his Treatise on Silhouette Likenesses (1835). Edouart overcame his initial reservations, however, and the silhouettes he produced in the late 1820s and 30s are among the art's finest examples.