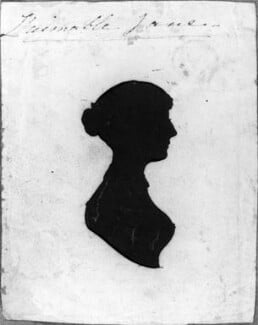 Silhouettes can rightly claim their place as the first form of widely available popular portraiture in Britain. In the hundred years before the invention of photography, they provided the British public with an inexpensive means of producing their own likeness. As an alternative to costly miniatures they could be painted or cut in multiples, with copies distributed to family and friends.

Silhouette cutting was first popular, however, at the very highest levels of society. The first record of the practice was at the court of Catherine de Medici (1519-89) in late sixteenth century France. It took some time to cross the channel and the earliest known British example was a portrait of William III and Mary, cut by a Mrs Pyburg in 1699.

Silhouettes grew in popularity throughout the second half of the eighteenth century, reaching a peak in the 1790s. After a period of declining quality due to the invention of machine cutting, they were revived by the master of the art Augustin Edouart in the 1830s. In the early twentieth century silhouettes became a quintessential part of the British seaside experience with cutters to be found on piers up and down the country. In the past decade they have enjoyed an extraordinary and subversive reinvention in the work of contemporary artists such as Kara Walker, who exploits their chequered history to examine issues of class and race.