The Decline of the Silhouette 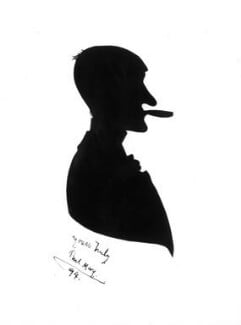 Augustin Edouart, the French artist who had done so much to revive silhouette portraiture in Britain, emigrated to America in 1839. The 1840s heralded the arrival of photography and the days of the popular silhouettist became numbered. The art had ironically nurtured the seeds of its own demise; the first experiments with photography involved tracing shadows with sunlight onto a photosensitive surface.

The invention of the carte-de-viste (visiting card-size) photographic portrait and the ensuing 'cartomania' of the 1860s sounded the final death knell. Those who might previously have payed a visit to the silhouette booth now frequented the commercial photographer's studio instead.

Silhouettes largely returned to their status as amateur art. They were still favoured, however, by illustrators and graphic artists for their bold, uncluttered style and lived on as holiday souvenirs during the heyday of the British seaside in the 1920s and 30s.