The Spread of the Silhouette 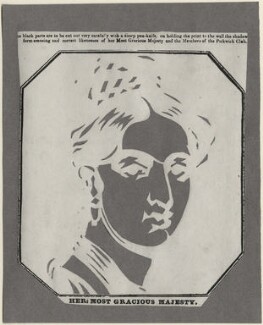 By the 1820s, silhouettes were no longer the preserve of the rich and famous. The development of cheaper scissors encouraged the amateur cutter while professional profile studios could be found in all the major towns and cities. Having cost as much as ten shillings in the 1790s, paper silhouettes could now be bought for as little as one shilling.

Machines were invented to replace freehand cutting and ingenious entrepreneurs toured the country with fairgrounds and travelling shows. These 'Automaton Artists' were given grand 'scientific' names such as the 'Prosopographus', 'Ediograph' Physionotrace' and 'Limomachia'. They dressed in flowing robes and the machines worked by concealed operators. They functioned by means of a rod and wire attached to a pencil, which passed over the sitters profile and reproduced the outline on a sheet of paper.

Portraiture had traditionally been an elite activity; a mark of power and prestige. With the spread of the silhouette, it was now available to all. In an era of unprecedented popular political activity, having yourself represented for the first time was not only entertaining but an important assertion of individual identity.