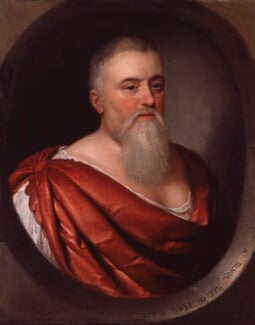 During his lifetime Sir TheodoreTurquet de Mayerne was probably the most famous and admired doctor in Europe, but he had many other interests, including cookery, travel, alchemy and above all art. He was born in Geneva into a family of French Protestants, followers of the teachings of John Calvin, known as Huguenots. He studied at Heidelberg and Montpellier, after which he established a successful medical practice in Paris. In 1600 Mayerne was made physician-in- ordinary to King Henri IV. But further career progress was blocked by his religion, and he also became involved in medical controversies. When his patron Henri IV was murdered in 1610 Mayerne decided to emigrate to England.

Mayerne had visited England in 1606 and impressed James I. He returned in 1611 as principal physician to the King; the appointment marked the beginning of an exceptionally successful career. In addition to his work for the royal family, Mayerne had a thriving practice treating members of the court. James I valued his continental connections and sent him on diplomatic missions to France. He was knighted in 1624. Discreet about his political opinions, Mayerne managed to maintain the favour of Parliament during the Interregnum. He died at the age of eighty-three, leaving a huge fortune and many manuscripts.

THE COURT PHYSICIAN
For a patient with breathing difficulties 'a syrup made with the flesh of tortoises, snails, the lungs of animals, frogs and crawfish, all boiled in scabrous and coltsfoot water, adding at the last sugar candy, will prove very useful.'

Mayerne's long and successful medical career was in part a result of his skill as a courtier and his political tact, but he was also a committed physician who defended his principles and did not avoid controversy. Early in his career, in Paris, he aligned himself with the followers of Paracelsus, a sixteenth-century physician who favoured the use of experimental chemistry in providing medical treatments. The Paris medical establishment was highly suspicious of this approach.

It was thought to threaten the principles of the ancient physician Galen, who believed that health depended on the balance in the body of four elements, or humours: blood, phlegm, choler (yellow bile) and melancholy (black bile), each of which had various properties combining heat or cold with wetness or dryness. Galenist treatments attempted to correct imbalances between these elements.

In fact Mayerne argued that his approach was perfectly consistent with Galen's principles, and his case notes make it clear that his diagnoses and treatments were indeed based on belief in the humours. His combination of forward-thinking experimental science and ancient beliefs resulted frequently in medical concoctions that seem bizarre today. Mayerne's most significant contribution to medical progress was his practice - very unusual in his day - of keeping detailed diagnostic notes about his patients. Over twenty volumes of his case notes survive.

Sir Theodore Turquet de Mayerne
Mayerne's costume in this portrait, a red robe like a Roman toga, suggests associations with classical antiquity and particularly with the learning of ancient Rome. Similar allusions can be found in other portraits of Mayerne, several of which make a connection between his own scholarship and that of classical antiquity. This type of depiction would be appropriate for many learned men, but it was perhaps particularly important for Mayerne, who was accused by some of contradicting ancient medical theory. The inscription around the painting, now partially lost, reinforces his status, referring to his position as physician to James I and Charles I, and to his title as seigneur of Aubonne, a property he bought in Switzerland.