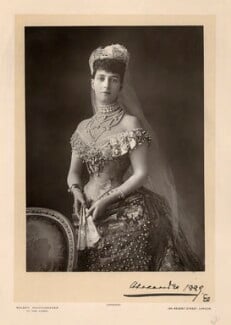 Between 1888 and 1896 the firm of Walery issued a remarkable series of portraits entitled Our Celebrities which were published as a monthly part-work by the publisher Sampson, Low together with biographical text on the subjects explain why they should be considered to qualify as "celebrities". The part works subsequently became available as bound volumes.

Walery was the by-line adopted by two photographers, a father and son who both adopted the working name Walery. The elder, Count Stanislaw Julian Ostrorog (1830-1890) was born in Mohylewo, Lithuania but spent most of his youth in Paris where the family went in 1831 to take political asylum. He served as a Captain in the 5th Lancers, in the Staff Polish Division as aide-de -camp to General Count Zamoiski on the British Government's payroll under General Storks. Subsequently he was promoted to colonel in the Turkish army in 1854. Around three years later he moved to London. He became a British citizen in 1862. As a professional photographer he first set up a studio in Marseilles and then Paris, which he sold in 1878, before opening his first studio in London in May 1883 at 5 Conduit Street. Following on from his successful portrait sitting with Queen Victoria in 1886 he moved to 164 Regent Street.

On his death in June 1890, his son Stanislaw Julian Ignacy, Count Ostrorog (1863-1935) continued the business and later combined (between 1890-1900) with another photographer Alfred Ellis to become Ellis and Walery. According to records of copyright registration now held at The National Archives at Kew some the later portraits in the "Celebrities" series were taken for Walery by Achille Victor Bosco of Walery Villa in Muswell Hill. In 1894 Walery gave an interview to Woman at Home magazine, which illustrated the extreme splendour of the firm's lavish reception rooms in Regent Street.

In 1900 Walery moved to Paris to open a studio on the Rue de Londres and began to specialise in the showgirls of Folies Bergere and subjects such as Mata Hari. His portraits of Josephine Baker are particularly celebrated and one from 1926 was recently included in the American National Portrait Gallery's book and exhibition Women of Our Time (2002)

This first display of Walery's work focuses on the portraits of leading women of the era including performers Madame Albani, Ellen Terry, Lady Bancroft and Sarah Bernhardt, scientists Elizabeth Garrett Anderson and Millicent Fawcett and members of royalty including Queen Alexandra and Queen Victoria. Nearly all the poses show the subjects posed as three quarter length, which Walery believed, was the most insightful way of making a portrait study.