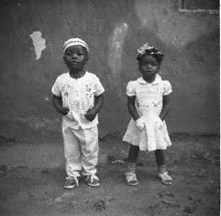 As part of Africa 2005, the National Portrait Gallery has invited two Cameroonian photographers to take part in a two-week residency in London culminating in a display at the Gallery from 8 July until 25 September. During the residency, which is supported by the Calouste Gulbenkian Foundation, studio photographers Samuel Finlak and Joseph Chila will make a series of portraits, in their own distinctive style, of Londoners and Cameroonians living in London. These will then be exhibited alongside examples of their work from Cameroon.

In 19th century Europe the practice of clients visiting studios to commission their portraits, and then posing amid the theatrical settings of backdrops and props, had an immediate appeal and spawned a highly popular and profitable genre. This simple idea has created social portraits of enormous complexity and, as it has travelled the world, taken root in many cultures in subtly different ways. Samuel Finlak's and Joseph Chila's work responds to this tradition. 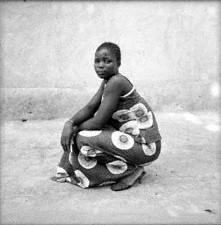 Samuel Finlak was born in 1958 in Mbem in the North West Province, where he learnt photography. For the last 20 years he has lived in the village of Atta. As the only photographer in the area he has photographed all resident ethnic groups. Joseph Chila was born in 1948 near Mbouda in the West Province of Cameroon, where he served as an apprentice from 1969-1974 before setting up a studio for six months. In 1975 he moved to Mayo Darlé after one of his relatives told him that there was no photographer in the area. He remained there until the mid 1990s when he retired to Bankim, some 70 km away, where he now lives, farming and undertaking occasional photographic commissions.