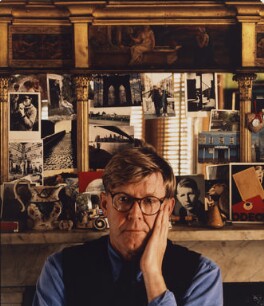 This retrospective look at the career of Derry Moore includes works from the last four decades. Moore became a professional photographer in 1971 after studying with the great British photographer Bill Brandt. A tribute to the latter's unsettling and surrealist style can be glimpsed in Derry Moore's early studies of the Rufus Isaacs family posed around a bandstand and an the intimate study of L.S.Lowry taken in the hallway of his home a few months before he died.

Derry Moore, however, is probably best known as a photographer of gardens, houses, and people in architectural interiors. His work has appeared in numerous books including The Dream Come True - Great Houses of Los Angeles, 1980, The Englishman's Room, 1986, Evening Ragas - A photographer in India, 1997 and Inside the House of Lords, 1998. His work which has taken him around the globe has also appeared in the pages of quality magazines such as Country Life, Town and Country, The World of Interiors, Architectural Digest, and Vogue.

The National Portrait Gallery acquired fourteen of his portraits at the time of his first portrait retrospective held at Hazlitt, Gooden & Fox in 1993. This new display includes the acquisition of several further key portraits from his distinguished career as well as four works specially commissioned by the Trustees of the National Portrait Gallery. These are the studies of the historian Amanda Foreman, the opera singer Dame Felicity Lott, the racehorse owner Sir Michael Stoute and the composer Mark-Anthony Turnage.