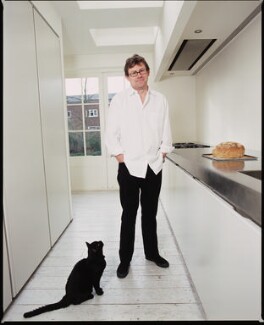 Food writer, Nigel Slater, photographed by Richard Ansett forms the focal point of a display of recently acquired photographs and marks the recent publication of Slater's book The Kitchen Diaries (2005). He is seen in the company of Jason Bell's iconic portrait of Coldplay, taken for a cover feature for The Sunday Times Culture magazine and Mary Dunkin's informal and relaxed study of the leading footballer and women's World Cup goal-scorer Rachel Yankey. Amit Lennon's widely reproduced and sympathetic portrait of John Peel with his famous record collection has been acquired to mark his recent posthumous election to the recently established UK Music Hall of Fame. Currently at the fore in the news, Shami Chakrabarti, Director of human rights pressure group, Liberty, is represented with a photograph by Neil Drabble originally published in the Telegraph Magazine in May 2005.

By popular demand Mary McCartney Donald's portrait of P.J. Harvey, first shown in the tribute to 25 Years of i -D magazine, has been kept on display for a further period. Hanging next to her is one of the new official portraits taken by Trevor Leighton to mark the comeback single and album of pop legend Kate Bush.