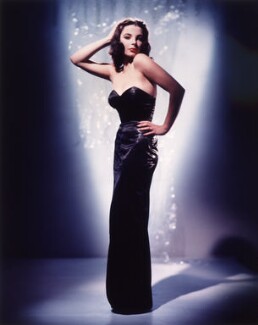 Working first as a portraitist for British Film Studios during the 1940s and 1950s, and then as a freelance advertising and fashion photographer, Cornel Lucas has enjoyed a career at the forefront of portrait photography for over forty years. This display brings together fifty of Lucas's finest works including iconic portraits of Joan Collins, Lauren Bacall, Dirk Bogarde and Brigitte Bardot.

Cornel Lucas was born in Highbury in London on the 12 September 1920. One of eight children he had six sisters and one elder brother whose work in a film-processing laboratory provided a first introduction to the film industry. Lucas started work aged fifteen as a junior trainee and also studied photography at the Regent Street Polytechnic. During World War Two he worked at the RAF Photographic School at Farnborough before going to work at Denham Studios in 1945. An early task was assisting Cecil Beaton on a portrait session for an Alexander Korda film.

His skill as a portraitist and stills man in the late 1940s lead to a special portrait session with Marlene Dietrich during the making of No Highway (1951). The success of these images and the many others created up to this point lead to he Rank Organization suggesting he leave Denham and set up a specially equipped 'Pool' studio at Pinewood to photograph the fifty plus major stars they had under contract. A specially created portrait studio was fitted out on the site of an old swimming pool to mirror what Hollywood photographers such as Clarence Sinclair Bull had created for MGM in Hollywood in the 1930s.

From the late 1940s until the end of the 1950s Lucas took thousands of photographs at Pinewood and other studios as well as on film locations and creating many iconic images of the leading players of the era shown here. In 1959 he left Pinewood to open his own studio in Flood Street in Chelsea where he made a second career embracing other aspects of photography including advertising and fashion photography whilst still continuing as a portraitist.

In the 1980s David Puttnam paid tribute to Lucas' enduring talent by reviving interest in his career by commissioning new work on films that he had produced such as The Mission (1986) as well as writing to the foreword to Lucas' first book. In 1998 Lucas became the first Stills Photographer ever to be awarded a Bafta for his services to the British Film industry. This display celebrates Lucas's 85th birthday and a lifetime in photography represented in fifty of his most compelling portrait photographs. It is accompanied by a deluxe publication, exclusively signed by Cornel Lucas, cinematographer and director Jack Cardiff and film producer David Puttnam.

Shooting Stars - Camera Portraits by Cornel Lucas. This slip-cased and limited edition book is available from the National Portrait Gallery Bookshop and online.