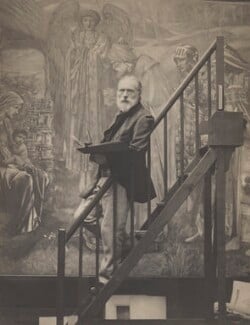 As an undergraduate in Oxford in the early 1850s, Burne-Jones met William Morris who became his lifelong friend and collaborator. The two later shared rooms in London where Burne-Jones was given lessons in art by Dante Gabriel Rossetti. Rossetti's influence, combined with a fascination for medieval romance, dominated Burne-Jones's work in subsequent years as a painter in watercolour and as a designer of tapestries, stained glass and tiles for Morris's firm.

In 1871 and 1873 Burne-Jones travelled to Italy where he studied the works of artists who inspired his mature painting style: Mantegna, Botticelli and Michelangelo. The inclusion of eight of his pictures at the first Grosvenor Gallery exhibition of 1877 brought him fame and, from around 1880, he concentrated on large scale oils with subjects derived from medieval legend and classical myth. One of the dominant figures in Victorian art, Burne-Jones was created a baronet in 1894. This selection of drawings and photographs records members of his family, including his wife Georgiana, as well as Burne-Jones himself.