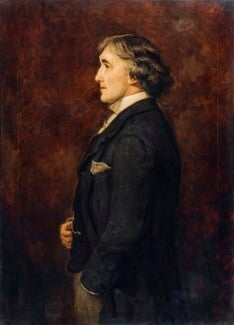 Supported by the Garrick Club

From a modest Cornish childhood, Sir Henry Irving (1838 - 1905) became the towering figure in Victorian theatre both as an actor and as a manager of the famous Lyceum Theatre. He is credited with reinvigorating drama at a time of increased competition from more populist entertainment. His performance as Hamlet in 1874 ran for over 200 nights, an unheard of success for a Shakespeare play, and established him as the foremost actor of the day.

For the next 20 years his productions were heralded as exemplars of stagecraft. Tours of America and Canada spread his fame around the globe: it has been said that, after Gladstone, he was the most celebrated Englishman of his time.

In 1895, his tireless effort to raise the reputation of the theatre was rewarded with a knighthood: the first to be bestowed upon an actor. The news of his death on 13 October 1905 was received with an extraordinary show of national mourning. To mark its centenary, the Gallery has collaborated with the Garrick Club (Irving's favourite haunt) to produce this display. It includes drawings, photographs and ephemera and also features Sir John Everett Millais' magnificent 1883 oil portrait of Irving