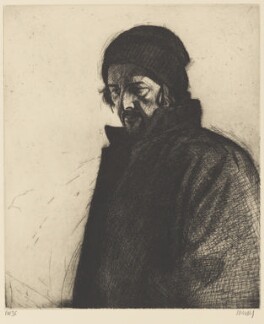 The Gallery holds works by many important 20th century artist-printmakers, including a strong collection of self-portraits, which were part of a renaissance in British printmaking.

The move to creative printmaking took place in reaction to huge changes in printing technology that had occurred during the 19th century, which had seen printing develop into a mere means of reproduction and divorced the artist from the production process. Many artists began looking back to non-commercial, traditional techniques, producing prints that could stand for themselves as works of art. The revival of original printmaking began with the Etching Revival in the 1850s, and was followed by renewed interest in other processes such as lithography, wood engraving and wood cutting in the late 19th and early 20th century. A second renaissance took place in the decades after the Second World War, with exciting and often avant-garde work being produced by printmakers experimenting with a wide range of often unorthodox techniques, and with many of our most prominent artists turning to printmaking as a means of artistic expression.

This display looks at the main printmaking processes used, and shows work by some of the significant exponents. Included are prints by early 20th century artist-craftsmen who were prominent in the revival: Eric Gill, Albert Garrett, Charles Shannon, Stanley Anderson, William Strang, Leon Underwood, Francis Dodd; by artists who took the medium to new levels during the second half of the century: Frank Auerbach, Julian Trevelyan, Michael Rothenstein, Richard Hamilton, David Hockney, Tom Phillips and by Stephen Conroy, who is active in the field today.