A Picture of Health: Portraits by Julia Fullerton-Batten 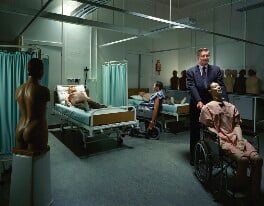 A Picture of Health is the second in a series of new photographic commissions supported by Deloitte, which focuses on an important area of public life. The sixteen sitters, who were chosen to represent clinical leaders and current trends in the health sector, have all made a difference, nationally or internationally.

The sitters are photographed in settings that provide an insight into their working environment. Locations range from The Royal College of Physicians to the operation centre of the South Yorkshire Ambulance Service. Sir Iain Chalmers, the founder of the Cochrane Collaboration, is photographed in his office, balancing on a footstall and surrounded by photographs of many of the colleagues who collaborated on this international project on the effects of healthcare. Margery Wallace, Founder and Chief Executive of SANE, described as a romantic crusader, is depicted wearing blue silk and sitting at a grand piano at the charity's research centre in Oxford. Other portraits on display include Claire Rayner in a recording studio, Nick Partridge at the London Lighthouse, and Lord Winston who is photographed in his London home.

Julia Fullerton-Batten used a large format 5x4 camera and worked on film, with up to four assistants, to achieve a sophisticated cinematic approach that suggests an ongoing narrative. Born in Germany, and brought up in the United States, Fullerton-Batten studied photography in England and spent five years working in London as a freelance photographic assistant before establishing her own career. She has been a regular finalist in the John Kobal Photographic Portrait Award and the Schweppes Photographic Portrait Prize at the National Portrait Gallery. Her work has recently been exhibited in the Association of Photographers Gallery and photo-london.

Other recent work, Teenage Stories can be seen at the Charing X Gallery, London from 8th June - 21st July 2006.