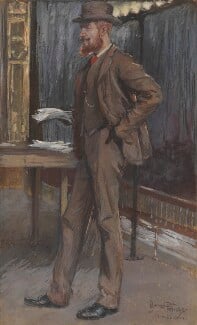 This display focuses on the generation of exceptional individuals who were born in 1856, the year the National Portrait Gallery was founded. George Bernard Shaw, John Singer Sargent, Keir Hardie and Sigmund Freud are all included alongside less well-known figures who have nevertheless made a significant impact on the way we live today. They include Annie Rogers, the promoter of women's higher education, Sir Joseph John Thomson, the Nobel prize winning physicist, and William Willett, the inventor of daylight saving.

Most of these sitters made their mark in the twentieth century yet they were born at a time when Queen Victoria's own family was still expanding and Britain was embroiled in the Crimean War. Their lives form a bridge between the seemingly distant era of the mid-nineteenth century and a recognisably modern period with the development of the Labour Party, psychoanalysis and subatomic physics.