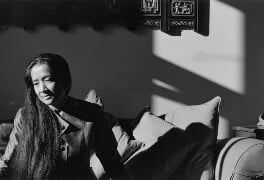 This photographic display of six contemporary figures with Chinese connections, from the National Portrait Gallery's collection, marks the start of the Chinese Year of the Dog, and coincides with the China In London season of events. The season celebrates Chinese culture and the relationship between China and Britain, with a series of exhibitions, shows, films and workshops.

As well as portraits of Chinese subjects, the National Portrait Gallery's collection includes works by Chinese photographers, such as Liam Woon, Lewis Morley and Edwin Hock Low, of Anderson & Low. Their work can be viewed on the Woodward Portrait Explorer in the IT Gallery.