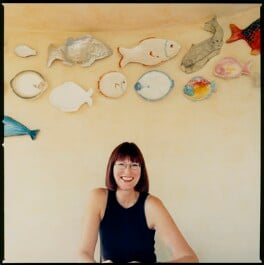 This new display of photographs acquired in the last two years celebrates the broad range of practices and styles in contemporary portrait photography. The selection includes figures from the worlds of broadcasting, literature, photography, classical music and cookery.

This new selection of ten works by Harry Borden has recently been acquired, with support from Herbert Smith, the National Portrait Gallery's 150th Anniversary Partner.

Portraits of four photographers are included. In Maud Sulter's large format Polaroid group, three photographers well represented in the collection, are shown at the time of their historic display in the Balcony Gallery. Work by Michael Ward is currently the subject of two displays: Mostly Women in the Bookshop Gallery and The Beatles on the Balcony. A tribute to Bob Carlos Clarke is made by the inclusion of an intimate photograph taken by his fourteen-year-old daughter, Scarlett Carlos Clarke. This is shown next to the photograph of Marco Pierre White which was generously presented to the gallery in 1999 and has not previously been exhibited.

The gift of Fergus Greer 's portrait of Sir General Mike Jackson can be seen in the context of a larger display of the photographer's work in Room 38a.

The acquisition of the portrait of Mary Wesley coincides with the well-received biography Wild Mary: The Life of Mary Wesley by Patrick Marnham and the use of this image in the on-line version of the Oxford Dictionary of National Biography.