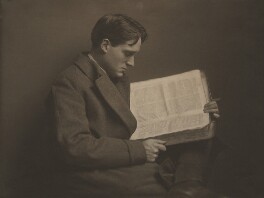 Actor, director and playwright, Harley Granville-Barker had a major influence on drama in the early Twentieth Century. He is recognised as establishing the foundations of a National Theatre and as the first modern British director.

Born in Campden Hill, London, Granville-Barker joined Ben Greet's touring Shakespeare company in 1895. In 1899 he played Richard II under the direction of William Poel, whose productions influenced Granville-Barker. In 1900 he joined the Stage Society and was chosen by George Bernard Shaw to play Marchbanks in Candida.

In 1902 Granville-Barker presented his first play The Marrying of Ann Leete. He completed his most noted play, The Vosey Inheritance (1905), whilst acting in and directing productions at the Court Theatre.

Between 1912 and 1914 Granville-Barker directed Shakespeare's The Winter's Tale, A Midsummer Night's Dream and Twelfth Night at the Savoy Theatre. Greatly removed in style from Victorian tradition, they laid a foundation for modern productions of Shakespeare, which were later published as The Prefaces to Shakespeare (1927-45).

In 1915 Granville-Barker went to New York with his repertory company and met and fell in love with poet and novelist Helen Huntingdon, whom he eventually married in 1918. Granville-Barker's remaining work for the theatre was in teaching and writing, living mostly in France and America. He died in Paris in 1946.