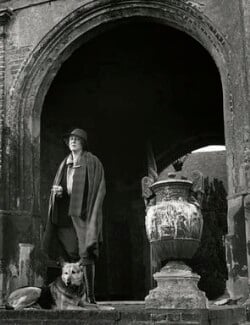 This display highlights the recent acquisition of a comprehensive archive of the portrait photographs of John Gay (1909-1999).

Celebrated as a photographer of railway stations, graveyards and country scenes, John Gay also took a number of striking portraits of literary personalities for The Strand magazine from 1947 to 1949. This display includes over twenty of these portraits from essays such as 'Mr Rank's young ladies', 'The best-selling authors' and 'The people who make money out of radio'. In-situ portraits of Agatha Christie, Enid Blyton, Dylan Thomas, Vita Sackville-West, Terence Rattigan and Gilbert Harding are shown with the original Strand essay page spreads.

Also displayed are six photographs that Gay took for Country Fair in the 1950s, including designer Lucienne Day and the champion rose-grower Harry Wheatcroft. Gay himself was named Country Fair 'Man of the Month' in June 1955 by editors A. G. Street and Macdonald Hastings, who described him as a 'photographer who truly reflects the glories of Country Fair'.

John Gay was born Hans Ludwig Göhler in Karlsrühe 1909. He left Germany in 1933, and moved to England in 1935 on a student visa[a1] . He was not technically a refugee and began a prolonged struggle to stay in Britain, to gain a work permit and to be naturalised. By 1937 he was granted permission to work as a photographer and by 1939 had established a promising freelance career.   In March 1940 he joined the Army Pioneer Corps and was immediately posted to the British Expeditionary Force and later the Intelligence Corps.  Comfortable with English customs and ways, he decided to change his name to John Gay, after the poet and dramatist of Beggar's Opera fame.. Demobbed on 22 March 1946 John Gay was granted a Certificate of Naturalisation and began his post-war career as a freelance photographer in Highgate naming his wife Marie Anita Gay as an active partner in the business.

His black and white topographical photographs are published in six books and collections of his non-portrait work are held at the National Monuments Record (5000 photographs of geographical, agricultural and architectural interest) and the Victoria and Albert Museum (photographs of ironwork).