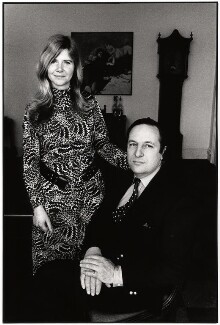 Four bold portraits of musicians by American photographer Francesco Scavullo provide the focus of this section. Scavullo began his photographic career at Vogue magazine as a photographer's assistant to Horst P. Horst. From 1965 to 1995 he photographed the cover portraits for Cosmopolitan magazine and his portraits also appeared in Rolling Stone, Life, Town and Country and Harper's Bazaar. Archive editioned prints, from the Song Portfolio were donated to the Gallery in 2005 by the Motion Picture Group.

Other featured photographers include Birmingham-born Brian Griffin, who was also photographing music legends of this period. He has recently been awarded an honorary fellowship of the Royal Photographic Society.

Photographer Susan Lipper has exhibited widely since the 1980s and books of her photographs include Grapevine (1994), trip. new york (2000) and Bed and Breakfast (2000). Her double portrait of eminent literary couple Lisa St Aubin de Teran and George MacBeth is included in the display.

Other double portraits on show include R.D. Laing and his wife Jutta, and Jilly and Leo Cooper by David Reed who worked for the Sunday Times between 1969 and 1991. Robin Laurance, also working for The Times in the 1970s and 1980s, is represented by his portrait of Baroness Thatcher taken shortly after she became leader of the Conservative party.