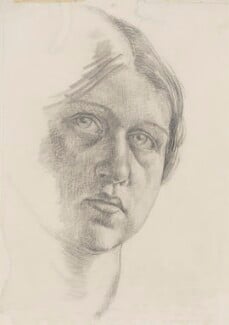 The National Portrait Gallery has recently acquired a number of remarkable 20th Century portraits on paper. This display features a selection of these major recent acquisitions, and provides a concise survey of portrait drawing in the last century.

The display commences with Dora Carrington's striking early self- portrait of 1910, depicting the artist as a student at the Slade School of Art. She later became obsessed by Lytton Strachey, the eminent biographer and a central figure in the Bloomsbury Group. Carrington's 1916 study for her celebrated portrait of Strachey is shown here. Carrington and Strachey began living together in 1917, the year that also saw the first appearance of Ezra Pound's major poetical work, The Cantos. Wyndham Lewis's Vorticist- inspired portrait depicts Pound shortly after, in 1920.

The centre of the display is formed by a remarkable group of portraits from the inter-war period. These include: Arthur Lett-Haines's 1919 drawing of the British modernist painter Frances Hodgkins, a portrait of the sculptor, painter and printmaker Leon Underwood by William Rothenstein, and a pair of portraits of the novelist Vita Sackville-West and her husband, the writer and diplomat Harold Nicholson, also by Rothenstein. Underwood's portrait of Freida Lawrence, and the earliest known portrait of the sculptor Henry Moore, by Robert Lyon, are also displayed.

The display concludes with two major post-war additions to the collection: the only drawing of the poet Ted Hughes by the writer Sylvia Plath, done on a sheet of her journal in 1957, shortly after they were married; and R B Kitaj's 1980 portrait of the distinguished writer on art, Richard Wollheim.