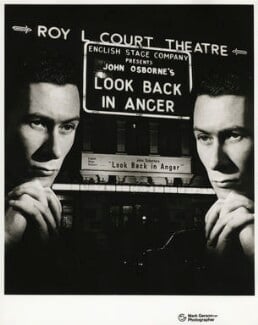 To celebrate the Royal Court Theatre's 50th anniversary in April 2006, a new display at the National Portrait Gallery shows photographs of actors, directors and writers who have enjoyed a close association with a company renowned for its commitment to new writing and for premiering some of the seminal plays of the last fifty years.

Since 1956 the Royal Court has staged more than 800 plays. Royal Court Theatre: A Celebration of Fifty Years draws exclusively from the Gallery's own Collection. Portraits on display range from Ida Kar's photograph of first artistic director George Devine in 1958 to one of today's leading stage-and-screen actresses Sophie Okonedo by Sal Idriss in 2002. In between, are classic studies of Harold Pinter by Bill Brandt, Jonathan Pryce by Snowdon, Arnold Wesker by Cecil Beaton and Joe Orton by Lewis Morley.

The English Stage Company at the Royal Court was Britain's first national theatre company. Its first production, opening on 2 April 1956, was Angus Wilson's The Mulberry Bush. Founder director George Devine set out to produce serious theatre and to stimulate new writing, presenting "new works as if they were classics, and classics as if they were new works". The company gave British premières of work by Brecht, Beckett, Ionesco, Sartre and Wedekind.

The play that is most closely associated with the early days of the Royal Court and that revolutionised British theatre was John Osborne's Look Back in Anger (premiered 8 May 1956). Osborne is represented in the display by a 1957 portrait by Mark Gerson. Royal Court Theatre: A Celebration of Fifty Years can be seen alongside the display The Royal Ballet at 75 (from 14 January 2006) at the National Portrait Gallery which celebrates its 150th anniversary in 2006.