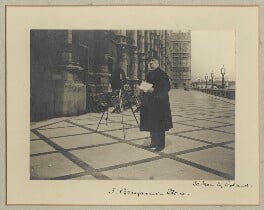 Sir Benjamin Stone (1838-1914) was a wealthy Birmingham industrialist, Member of Parliament for East Birmingham and above all a passionate, even obsessive, photographer and collector. Reflecting the spirit of his age, he tirelessly advocated the importance of photography in creating an historical record for the national good. He had started collecting photographs in the 1870s, but dissatisfied with what he saw as the lack in evidential precision of much commercially produced photography, he took up photography himself. He photographed not only in Great Britain, recording antiquities, ancient buildings and folk customs, but also on his travels abroad including Scandinavia, Japan and the West Indies.

Knighted in 1892 for his activities in the Conservative Primrose League, he was elected to Parliament for East Birmingham, unopposed, in 1895. He immediately put his newly acquired political and social status to work. In 1897 founded the National Photographic Record Association, which derived its inspiration from the growing number of regional photographic surveys which were founded in the last decade of the nineteenth century, especially the Warwickshire Photographic Survey which was run under the auspices if Birmingham Photographic Society, and of which Stone was President.

On entering Parliament Stone immediately set about recording what he perceived as one of the key institutions in the development of the British character and "historic temple of British liberties". Between 1897 and his retirement from the House of Commons in 1910 on grounds of ill-health. He was interested not just in the individuals from distinguished members of Parliament and Cabinet Ministers to the officers and servants who made the place work, the traditions of the institution, its architecture and the sites where "more things are done that are destined to be remembered in history" than anywhere else. Stone portrayed that all, whether Joseph Chamberlain, then Colonial Secretary, or Frederick Foxton the Forman Painter, with equal directness "the subject looks you straight in the eye, not with the evasive glance of ordinary portraiture. In these likenesses we have visualised for us the real personalities of Parliament without resort to the transfiguring tricks of the professional photographer."

In the last decades of his life Stone was a household name, his photographic exploits at home and abroad reported in the press. He earned various nicknames in the press "Sir Snapshot" or "The Knight of the Camera" and even the suggestion that such was his prolific record-making it was truly the age of "Stone -age man' . He became, in effect, the national photographer, being appointed official photographer to the coronation of George V in 1911. In 1905-6 some of his photographs were published as a fortnightly magazine Sir Benjamin Stones Pictures which made up two volumes, first 'Festivals, Ceremonies and Customs' and second "Parliamentary Scenes and Portraits'. The National Portrait Gallery holds some 2000 of Stone's Parliamentary photographs including portraits of M.P.s of all political persuasions, groups of visitors from all of the world , officers, servants and functionaries. This display gives a taste of this rich and diverse collection.

(all quotes from the Introduction to Sir Benjamin Stone's Pictures Vol 2 Parliamentary Scenes and Portraits.)