The Beatles on the Balcony 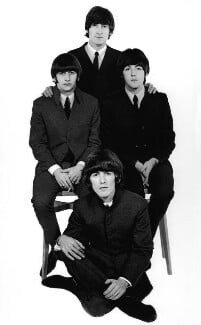 Many of the most memorable photographs ever taken of the Beatles form the basis of this historic new exhibition which coincides with the first major retrospective devoted to Angus McBean (1904-1990), the acclaimed British portrait photographer who took the defining images of the group at the start and end of their careers as The Beatles.

McBean first photographed the group in 1963 for the cover of their Please Please Me album and six years later, posed on the same Balcony at EMI house in Manchester Square, for the proposed Get Back album. These two images, which finally appeared on the Red and Blue albums, are shown in the context of classic, rare and unseen images by famous photographers who helped form the group's public image.

Sir Paul McCartney has generously contributed his recollections of this period to the Angus McBean catalogue and has helped select and lend ten of Linda McCartney's most defining images of the group, ranging from shots taken in the recording studio to others at the launch of the Sgt Pepper album and several rarely exhibited studies in colour.

From the early years, there are images by Astrid Kirchherr, the girlfriend of Stuart Sutcliffe, who helped style their haircuts into the famous mop tops, to other early works by Mike McCartney, Paul's brother who documented their early days in Liverpool. Other early works include a collection of Dezo Hoffmann's inimitable shots including those from the Beatles' first recording session at EMI Studios (June 1962). From1963, Michael Ward's previously unseen pictures of the group in Liverpool are shown, as well a rare photograph of one of their last appearances at the Cavern Club. And while it was Hoffmann was took the memorable early 'leaping shots' of the group, new research has revealed that the uncredited photographer of the iconic Twist and Shout EP was in fact Fiona Adams. Her print and contact sheet are exhibited here for the first time.

Capturing crucial moments in their six-year career together, Philip Townsend's portrait of the group shows them with the Maharishi and full entourage, shortly before they set off for India in 1968. Other less well-known but important work to be included will be pictures by Jean-Marie Perier's for the group's Strawberry Fields/Penny Lane single; Norman Parkinson's classic 'shish kebab' image and Terry O'Neill's equally famous image of the group performing in a backyard at the EMI studios.

These pictures and a few other surprises have been kindly lent by several collectors and leading galleries, whilst others have come from the National Portrait Gallery's own fast growing collection.

The Beatles on the Balcony is curated by Terence Pepper, Curator of Photographs at the National Portrait Gallery together with Dave Brolan, Picture Editor for Special projects on Q and Mojo magazine.