The Face of Monarchy 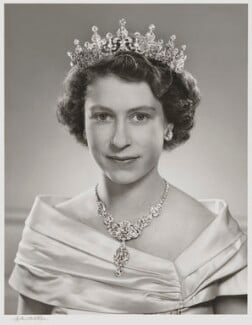 This display celebrates the eightieth birthday of Her Majesty The Queen who was born on 21 April 1926. Selected from the National Portrait Gallery's extensive holdings of Royal portraits, it surveys the surprising diversity of ways in which the Queen has been portrayed during the course of her life and reign.

The selection commences with portraits of the young Elizabeth, photographed by Marcus Adams in c.1929 and c.1939. The relaxed, spontaneous character of Adams's images departed from the formality of earlier portraits of the Royal family. Yousuf Karsh's 1944 photograph of the future monarch, released on the occasion of her eighteenth birthday, continued the trend towards increasing informality. It contrasts with the regal character of his 1951 photograph taken the year before the coronation. The photographs taken by Dorothy Wilding in1952 move between these two extremes. In depicting the newly crowned Queen wearing gowns designed by Norman Hartnell, Wilding invested formality with an unmistakeable sense of glamour.

More recent images of the Queen demonstrate an ever-widening response to the idea of monarchy. Pietro Annigoni's magisterial portrait of 1969 was startlingly different from his previous, romantic view. In the 1980s the American Pop artist Andy Warhol presented the Queen as a colourful celebrity. The 1999 portrait by Hiroshi Sugimoto is among the strangest representations of Royalty. A photograph of a wax likeness, it engages directly with the complexities of creating an image of monarchy.

Links
- Portraits of Queen Elizabeth II in the Gallery's collections