The Royal Ballet at 75 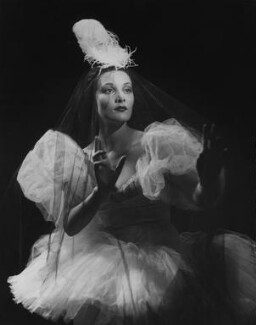 2006 marks the seventy-fifth anniversary of The Royal Ballet and to celebrate the occasion the National Portrait Gallery is showing a selection of dance portraits from its extensive collection of photographs. This display showcases some of the key figures who played a part in shaping the Company and influencing British ballet in the twentieth century. As Britain's most prestigious ballet company, The Royal Ballet has an international reputation for its dancers, choreographers, productions of the classics and new work and, most significantly perhaps, for its style -the 'English style' -a distinctive blend of restrained classicism, musicality and lyricism.

The Gallery has chosen from its collection more than thirty portraits that together capture something of The Royal Ballet's distinctive qualities and represent some of its most celebrated stars. These include the pioneers and founding members whose vision helped to establish the Company. Foremost amongst these, as portrayed by her brother Gordon Anthony, is the Company's founder Dame Ninette de Valois, who determined to open a school in which to train dancers, set up a permanent company and build a national ballet. Also on show is Anthony's portrait of the redoubtable theatre manager Lilian Baylis, who provided the Company with its first home at Sadler's Wells Theatre. Other founding members featured include choreographer Frederick Ashton, in a photograph by Angus McBean, musical director Constant Lambert, photographed by Yvonne Gregory, and the greatest of all The Royal Ballet's ballerinas Margot Fonteyn, as photographed by Yousuf Karsh. Together, these are the individuals whose creative influence gave birth to a 'national style' and, in so doing, gave the Company its identity.

Over the last seventy-five years The Royal Ballet has nurtured and showcased a wealth of talented dancers and choreographers, many of whom have made a significant contribution to 20th century British ballet and gone on to pursue international careers. The display includes a small selection of some of the most celebrated artists to work with the Company. Dancers from the early years include Pearl Argyle, Lydia Lopokova, Harold Turner and Anton Dolin - represented in vintage prints by photographers such as Paul Tanqueray, Cecil Beaton and Cyril Arapoff. Other images include rarely seen portraits of Alicia Markova by Dorothy Wilding and an early portrait of Rudolf Nureyev by Beaton. Michael Somes and David Blair are featured, looking like matinee idols, in photographs by Tanqueray and Vivienne. Among the more contemporary images are portraits of former director of the Birmingham Royal Ballet, Peter Wright, by Barry Marsden, and current dancers Darcey Bussell and Jonathan Cope, by Jillian Edelstein. Recent acquisitions include photographs by Alan Bergman of Wayne Sleep, Irek Mukhamedov and Company director Monica Mason.