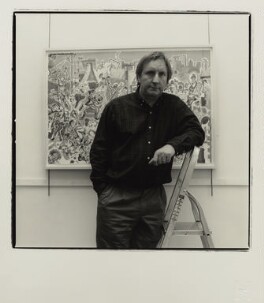 The sixteen photographs in this display reflect the wide variety of contemporary photographs recently acquired by the National Portrait Gallery. Each year the Photographs Collection acquires approximately 200 new photographs, from a cross-section of professional image-makers, which range from personal projects to commissioned works.

The majority of portrait photographs offered to the National Portrait Gallery have originally been commissioned by magazines and newspapers. John Reardon's award winning photograph of thirteen chefs posed in a tableaux resembling Leonardo da Vinci's Last Supper was commissioned for the Observer Food Monthly and has been reproduced many times in other periodicals. This print is in an edition of thirteen.

In contrast, Ghanaian-born Sal Idriss is undertaking a personal project to photograph black British people that are recognised for significant achievement in their professions. His portrait of Sokari Douglas-Camp is one of twenty that the Gallery has collected to date. 1960s model-turned photographer, Jill Kennington, is currently undertaking a personal project photographing her contemporaries, one of which is the designer Margaret Howell. James Hunkin has recorded prominent people from different fields in a series of collections. His previous collections include theatre people for the Royal National Theatre (1997), religious leaders (Faces of Faith, 1997) and a collection of leading scientists, commissioned by NESTA for Science Year. (2001), examples of which are represented in the collection. The group of six artists shown here is part of a large ongoing commission by the Royal Academy to record all living Royal Academicians. A video interview showing James Hunkin can be seen on the Portrait Explorer in the IT Gallery.