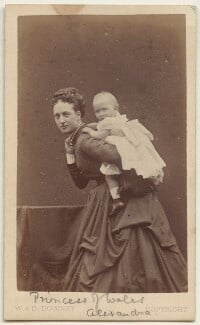 'Her voice, her walk, carriage and manner are perfect, she is one of the most ladylike and aristocratic looking people I ever saw!'

Alexandra of Denmark was fifth on a list of seven princesses selected as possible brides for the Albert Edward, Prince of Wales and future Edward VII, known to his family as 'Bertie'. Although less eligible than her rivals, Alexandra's beauty eclipsed her competition as it was hoped an attractive wife would curb the prince's wayward behaviour. The wedding was a muted affair, coming in the midst of mourning for Queen Victoria's husband, Prince Albert. The queen's good wishes for her son and his bride were tinged with her own feelings of loss: ' Here I sit, lonely and desolate, and Bertie has taken his lovely, pure, sweet Bride to Osborne, such a jewel whom he is indeed lucky to have obtained. How I pray God may ever bless them! '

Alexandra brought glamour to the sombre royal family, and the new couple became the focus of high society. The advent of photography and illustrated magazines meant that images of the stylish princess were in high demand; her clothes and hairstyles were widely copied. Portraits of Alexandra fulfilling various roles, as royal consort, leader of fashion, devoted mother and patron of charities, created a blueprint for images of modern royal women, in particular Diana, Princess of Wales.