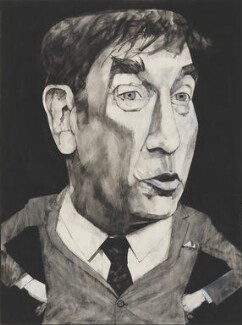 This group of caricatures, a recent acquisition, represents popular comedians and broadcasters of the 1960s and 70s, collectively known as the 'Media Mob'. It also includes politicians and businessmen who, like the entertainers, were becoming 'media personalities'. Made for publications including the Listener, Radio Times, Sunday Times and Cosmopolitan magazine, these caricatures provide a fascinating insight into the importance of illustration during this period in creating and popularising these media 'personalities'.

Fantoni's involvement in the media world of the 1960s gave him a unique perspective when creating these portraits. After studying Fine Art at Camberwell School of Art, Fantoni joined the staff of the magazine, Private Eye, as cartoonist and columnist. He also wrote scripts for the BBC's groundbreaking satirical show That Was the Week That Was. In 1966 he became a television star himself, hosting the fashion and music programme, A Whole Scene Going On, where Twiggy made her television debut, and for which he was voted Television Personality of the Year.

Fantoni produced caricatures for the listings magazine RadioTimes and its sister publication the Listener from the mid-1960s. Photographic stills from television programmes were beginning to replace illustration by this time, but caricatures were considered to be a potent alternative to the photographic portrait. His style eschews extreme distortion, but subtly exaggerates features while adhering closely to the sitter's literal appearance.

The caricatures in this display are working drawings. Using standard black and white publicity shots, Fantoni was required to produce finished artwork in a single day. He often knew very little about the shows or their stars, and in those days there were no preview tapes. Fortunately, the comedy programme The Two Ronnies had been running for four years when he created the double portrait of its stars for the Radio Times in 1976, and was able to provide a witty observation of their relationship. Colour printing, introduced to the Radio Times in 1960, was expensive and only used occasionally, and Fantoni's 'cut-out-doll' feature, illustrating the many guises of comedian Dick Emery, was part of an eight-page special promoting the BBC's new season. Producing a caricature of Sir Freddie Laker for Cosmopolitan magazine in the late 1970s also gave Fantoni the opportunity to experiment with colour