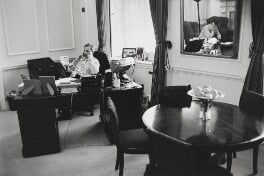 In association with The Times

In March 2003, as Tony Blair took the final steps towards leading the nation to war with Iraq, award-winning photojournalist Nick Danziger and Times Literary Supplement editor Peter Stothard were given thirty days of unprecedented access to the Prime Minister and his closest aides.

On display to the public for the first time, Danziger's portraits tell the candid story of a decisive time in Britain's political history. Revealing the inner circle of the political players in Downing Street, at Camp David and in the power corridors of Europe, these portraits provide a poignant insight into Blair's hopes and fears as he took on a sceptical electorate, the Labour Party, Jacques Chirac and ultimately Saddam Hussein. 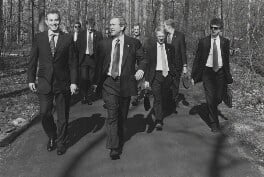 On their first day of thirty days with Tony Blair, Danziger and Stothard are in 'the den' at Downing Street. 'So they are all against me, is that it?' Blair asks Alastair Campbell, Director of Communications and Strategy. Campbell does not reply. With the leaders of France and Germany, the leader of the House of Commons, the leading figures in the Trade Unions, about half his own MPs, including Cabinet Minister, Clare Short, all opposed to war with Saddam, he doesn't have to tell the Prime Minister what he already knows.

Four years on, the war in Iraq continues and Tony Blair is preparing to hand over leadership of the Labour Party. As Britain considers the legacy left by our Prime Minister of the past 10 years, Danziger's portraits, displayed alongside new captions by Stothard, remind us of 'Blair at War'.

On the display of this exceptional private view of the Prime Minister, Sandy Nairne, Director of the National Portrait Gallery, London says: 'Danziger's closely observed portraits of Tony Blair take us to the heart of statesmanship: to the interaction between world leaders at a critical moment.'