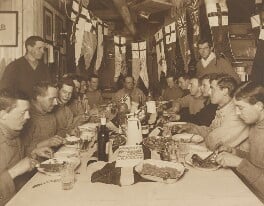 Captain Robert Falcon Scott (1868 - 1912) is an iconic figure of heroism and courage. As commander of the British Antarctic Expedition, 1910-1912, he led the first British team to the South Pole. The story of his bleak arrival, a month after the Norwegian explorer Roald Amundsen, and the unendurable hardship of his return journey has become legendary. With the news of his death, Scott was celebrated as Britain's first great hero of the twentieth century

This display of four photographs by Herbert George Ponting (1870 - 1935) includes the Gallery's first public showing of the recently acquired Captain Scott's Birthday Dinner and Dr Edward Wilson. Ponting's expedition photographs captured both the terrifying beauty of the Antarctic landscape and the extraordinary endurance of those who inhabited it. These photographs remain powerfully evocative of the heroic age of polar exploration.