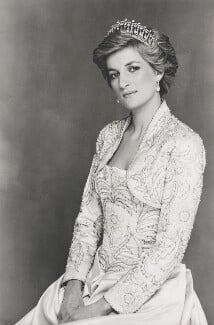 Marking the tenth anniversary of the death of Diana, Princess of Wales, this display brings together a diverse range of portraits of the princess by photographers including Lord Snowdon, David Bailey and Mario Testino. Drawn from the Gallery's Collection, this display covers the years from her engagement to the Prince of Wales in 1981, to her last public charitable campaign in 1997.

The wedding of The Prince and Princess of Wales took place at St Paul's Cathedral on 29 July 1981. When Patrick Lichfield's official photographs of the occasion were reproduced globally, no one could have predicted to what extent the 'fairy-tale' princess would capture the world's imagination. The portraits in this display show the development of Diana's image from a shy teenager to the glamorous and sophisticated woman she became, one of the most photographed in the world.

The selection demonstrates the many roles that the princess embodied during her life: as a representative of the royal family, as a wife and mother, as an ambassador for charities and good causes, and as an icon of fashion and beauty. Mario Testino's portrait captures Diana's celebrated radiance, a quality that endeared her to millions worldwide.