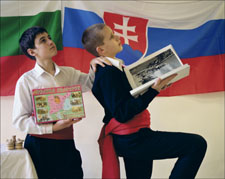 Examining the contemporary experience of young people's migration to Britain, Different Worlds is a companion exhibition to Between Worlds: Voyagers to Britain 1700-1850, opening at the National Portrait Gallery, London on Thursday 8 March.

Responding to the narratives explored in Between Worlds - the diverse experiences of 18th and 19th century voyagers to Britain such as the 'Four Indian Kings' of North America and Sake Dean Mahomed of India - students from two London schools, aged between 12 and 16 from Forest Hill Boys School, Lewisham and Quintin Kynaston School, Westminster, have worked with the artist Gayle Chong Kwan to interpret their personal experiences of migration to Britain. The exhibition comprises individual and group photographic portraits and written responses from the students.

Each of the 17 students that have taken part in the project shares the experience of living between at least two cultures. The majority of boys from Forest Hill Boys School have settled in Britain during the last three years. The young people from Quintin Kynaston School have arrived more recently, in the past year. They have started school in the last few months and are all learning English as an additional language.

The young people or their families were born in various parts of Europe, Africa, the Middle East and Asia. They are similar to earlier travellers to Britain in that their reasons for coming are diverse: family ties, economic prospects, political asylum and new opportunities. Some have travelled here directly while others have had circuitous, and in certain cases, traumatic journeys.

The students began by exploring the lives and images of sitters included in Between Worlds, and also by visiting the National Portrait Gallery to investigate portraits from sixteenth to nineteenth centuries. Some were influenced by the Tudor portraits that use pose to denote power and ambition, others were inspired by historic and contemporary portrait sitters who had chosen to be depicted with significant personal objects or in landscapes that recalled their homeland.

Different Worlds: Contemporary Responses to Migration has been curated by Matilda Pye.

On the experience of the students who have created the exhibition and the project as whole, Matilda says: 'Each of the participants looks with pride from the present to the future of their adult lives. Some of the participants are full of ambition for the roles they intend to play in shaping their personal future and in individual cases, the future of others. Certain portraits are less certain of what is to come or where exactly they intend to make their lives. This is in part a response to conflict in their home countries.'