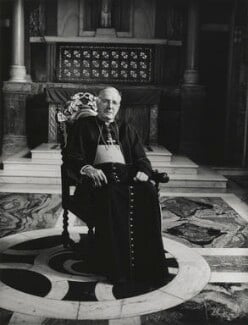 This display of ten newly commissioned photographs is the latest in a sequence that previously charted the health sector and the field of telecommunications. At a time when questions of faith and community come under close scrutiny, Don McCullin's portraits focus on the leaders and senior representatives of the major faiths in the UK. McCullin, internationally recognised as one of the greatest of British photographers, brings his incisive eye and his mastery of light to capture his subjects in locations that reflect their spiritual lives. Sitters include the Archbishop of Canterbury Dr Rowan Williams, Chief Rabbi Sir Jonathan Sacks, Dr Syed Aziz Pasha, General-Secretary of the Union of Muslim Organisations, and Reverend Esme Beswick, the first black woman to become a President of the Churches Together in England.