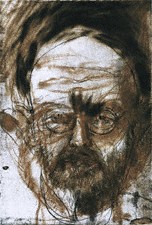 Jim Dine (b.1935) is one of America's most celebrated artists. Dine first achieved critical recognition in 1960 for The House, an 'environment' comprising junk, found objects and other street debris, which he installed at the Judson Gallery, New York. His subsequent installations provided settings for live performances, known as Happenings, in which the artist was the main protagonist. The artworks he made in the early 1960s incorporated real, everyday objects. Through this involvement with imagery relating to the urban environment Dine became closely linked with the emergence of Pop Art in New York.

Dine's work has developed across a broad front, encompassing painting, sculpture, drawing, printmaking, and book illustration. Central to his art is the way it combines realism with a powerful expressive force, investing familiar objects and images with complex layers of personal meaning. This display comprises 55 Portraits, Dine's magisterial series of etchings, made in 1995. Its subject is the artist's own face. In the course of making the prints Dine worked from life, subjecting his features to sustained scrutiny. The resulting works are characterised by intense observation and personal exploration, yielding an astonishing variety of expressive invention. This is the first time that these remarkable portraits have been seen in this country.

The display has been generously supported by Fletcher King Investment Management. 55 Portraits is displayed courtesy of Alan Cristea Gallery, London.