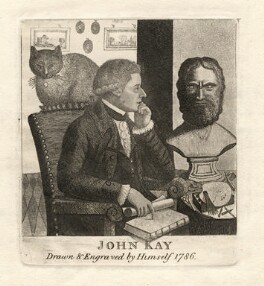 John Kay (1742-1826) was an Edinburgh barber and a self-taught print-maker. Over thirty-five years he produced hundreds of satiric etchings of people from all walks of life, providing a wry portrait of late Georgian society.

Edinburgh comprised a compact, crowded medieval city and an emerging 'New Town'. One of the most important centres of the Enlightenment, new ideas about social progress and the possibilities of rational and scientific knowledge were spreading, and influencing all aspects of cultural and economic life.

Kay had few actual sitters for his prints. Most were executed with 'the impression of a passing glance'. The results were described as 'the most exact and faithful likenesses that could have been produced by any mode of art'.

In a print market that grew massively during the eighteenth century, he met with some success. There was an insatiable demand for cheap popular prints, and for political and social satires. But his concerns were not principally commercial. He made his living painting miniatures, though few of these have yet been located.

Very little is known of his life. We see Edinburgh through his eyes, but Kay remains an enigma. After his death the documentary value of his prints was realised, and collections were published with accompanying biographies. The Gallery's Archive holds over 200 of his prints, which are viewable online and on the Portrait Explorer in the IT Gallery.