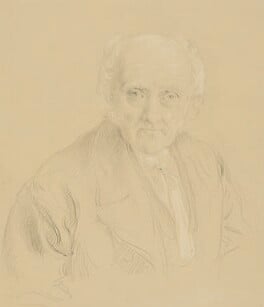 Samuel Bagster the Elder
by John Linnell
circa 1852
NPG 1816

John Linnell (1792-1882) was one of the most successful and admired Victorian artists. Brought up in Bloomsbury, London, where his father was a frame maker and picture dealer, Linnell was a precocious talent. As a child he would copy the works of the popular artist, George Morland, for his father, who sold them to clients. He began his formal art training at the Royal Academy Schools aged thirteen, and found companionship with older students including Benjamin Robert Haydon and David Wilkie. Linnell shared lodgings with William Mulready, an artist he intensely admired, and a small portrait of Mulready in the Gallery's Collection, painted by Linnell in 1833, testifies to their lasting friendship.

From the beginning, Linnell was committed to painting landscapes. Brought up in the heart of the city, he spent much of his time as a student sketching on the banks of the Thames, under the supervision of his master, the watercolourist John Varley. Linnell had a strong Christian faith, and his approach to landscape was affected by his conversion from Anglicanism to the Baptist church in 1811(he later rejected organised religion in favour of his own interpretation of the scriptures). Linnell saw nature as direct proof of God's existence and believed that 'truth to nature' in his work was a moral duty.} 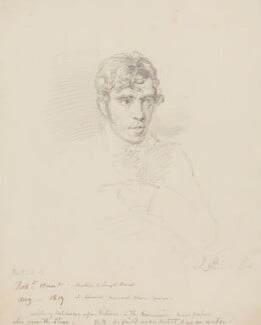 However, as his family responsibilities grew (he had nine children) he turned to portrait painting to provide a regular income. He wrote: ' portraits I painted to live, but I lived to paint poetical landscape'. His talent for capturing a likeness meant that he enjoyed extensive aristocratic and royal patronage for his oil paintings, miniatures and drawings. The National Portrait Gallery collection includes portraits of Prime Minister Sir Robert Peel, and miniatures of the civil engineer George Rennie and the statesman and poet Francis Egerton, 1st Earl of Ellesmere. Linnell also made portraits of his wide circle of friends, many of whom were artists, including Samuel Palmer, who became Linnell's son-in-law in 1839, and J.M.W Turner, whose portrait by Linnell is currently on display in Room 18. Linnell sometimes used portraits as a form of currency, giving the craftsmen he employed to work on his houses in Bayswater, London, and Redhill, Surrey, drawings of themselves in part-payment for their labour.

Linnell was intensely proud of his working-class background, and despised hierarchies. His forthright manner when asking for payment often surprised his aristocratic clientele, accustomed to credit, and his long association with the Royal Academy was always uneasy. He exhibited there every year from the age of fifteen but, despite his undoubted success, consistently failed to be elected as an associate and eventually stopped submitting his name. Linnell believed that malicious gossip about him, spread by John Constable, had turned the Academy hostile. By the 1860s, Linnell's exclusion was considered a public scandal, and the Academy invited him to put his name down for an associateship. He refused, and instead published a pamphlet attacking the Academy's exclusivity. Nevertheless, Linnell was greatly esteemed during his lifetime by his peers. As a landscape artist he was considered second only to Turner and, at his death, The Times obituarist wrote 'a glory seems to have faded from the domain of British Art'.

Drawn from the Gallery's collection of works on paper, this display focuses on Linnell's intimate drawings and watercolours and includes portraits of patrons and friends, such as the artist William Blake, whom Linnell championed and supported.