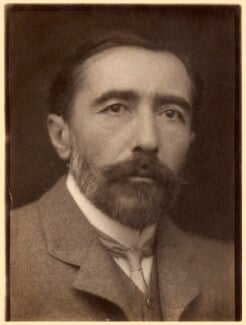 'My task which I am trying to achieve is, by the power of the written word, to make you hear, to make you feel - it is, above all, to make you see.'
Joseph Conrad, 1897

Conrad is recognised as one of the greatest novelists in the English language. In works such as Heart of Darkness (1899) and Lord Jim (1911), he examined complex moral situations in exotic locations, often inspired by his twenty-year career as a sailor. His prose is marked by reflective irony and written with stylistic virtuosity, which is all the more remarkable for a writer who did not know a word of English until he was nineteen, and never spoke it fluently.

Born Józef Teodor Konrad Korzeniowski in the Ukraine, to upper-class Polish parents, Conrad read authors such as Dickens in French translation. He was orphaned in childhood and became a sailor aged sixteen, an unusual decision for a boy of his class and nationality. His adventurous life on the seas, travelling the world with the French and English merchant navy, provided rich source material for his later writing: what Henry James described as his 'immense treasure'.