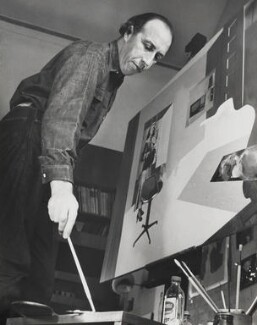 To coincide with the National Portrait Gallery's major exhibition, Pop Art Portraits, this display presents a fascinating selection of photographic portraits of the key players in the British art scene of the 1960s. Focusing on the Pop artists of the period - among them Richard Hamilton, Peter Blake, Pauline Boty and Derek Boshier - the display is titled after the ambitious 1965 book Private View by critic John Russell and curator Bryan Robertson, which featured photographs by Lord Snowdon.

Influential at the time it was published, Private View examined just why London had become, along with Paris and New York, one of the three art capitals of the world. Looking at both the senior British artists as well as the new generation of Op, Pop and Abstract artists, the book - with its combination of Lord Snowdon's photographs and Germano Facetti's typography - established a bold, new visual language. Fourteen of Snowdon's portraits from the book are featured in Private View: British Pop and the 60s Art Scene including portraits of Howard Hodgkin, gallery owner John Kasmin and the assembled art critics of the time - David Thompson, Edward Lucie-Smith, Robert Melville, Jasia Reichardt and Norbert Lynton.

As well as these iconic Snowdon portraits, the display will include several works by other leading photographers of the period - Tony Evan's portraits of Pop artists Peter Phillips and Derek Boshier, Jorge Lewinski's studies of Richard Hamilton and Bridget Riley in their studios and David Bailey's classic shot of scenesters including Ringo Starr assembled at an opening at Robert Fraser's gallery in 1968.