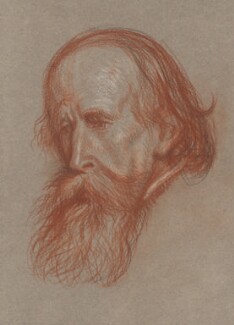 This display compliments the long-term loan of a remarkable oil painting by George Frederic Watts of Sir Leslie Stephen, first editor of the Dictionary of National Biography and father of Virginia Woolf and Vanessa Bell. The National Portrait Gallery photography archive and collection of works on paper include a number of portraits of Stephen, which have never before been displayed in the galleries. A fine chalk drawing by Sir William Rothenstein is here presented alongside photographs by the likes of Julia Margaret Cameron and George Beresford.

Leslie Stephen was an author, literary critic and the father of Virginia Woolf and Vanessa Bell. His publications ranged from biographies of Samuel Johnson and Alexander Pope to philosophical works, such as Social Rights and Duties (1896). Unusually, his literary distinction was accompanied by an equally respected status as a mountaineer. Although illness and overwork made him prematurely frail, his intellectual vitality never diminished.

Stephen wrote prolifically on a breadth of subjects but all his work revealed a strong sense of moral responsibility. He was appalled by slavery and actively supported the north in the American Civil War. He was briefly a priest but renounced his order and, controversially, described his loss of faith in An Agnostic's Apology (1893). As editor of the Cornhill magazine (1871-82), he cultivated a generation of writers, including Thomas Hardy, Robert Louis Stevenson and Henry James. He was a biographer of concision and flare. His crowning achievement came as the first editor of the Dictionary of National Biography (DNB), a literary project of unprecedented ambition.

Stephen stepped down as editor of the DNB in 1891. Honorary degrees, presidency of the London Library and a knighthood followed. In 1896 he was elected to the Board of Trustees of the National Portrait Gallery ­ an institution that shared the DNB's goal of promoting a collective sense of national culture. The close affinity between the DNB and the Gallery has continued. The revised Oxford Dictionary of National Biography (2004) was published with 10,000 portrait illustrations, researched and selected in collaboration with the Gallery.