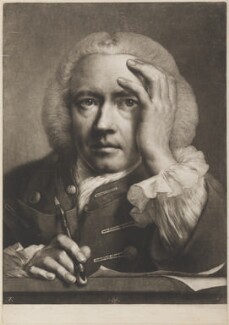 In the last years of his life Thomas Frye (1710 - 1762), the Dublin-born artist, published two remarkable series of mezzotints - 'Fancy Heads' - highly original life-size images of men and women, notable for their striking poses, enigmatic expressions, fashionable and exotic costume. The countless plays performed every week in London, and the masquerades held in pleasure gardens were probably Frye's inspiration, and it is likely that he was aware of the growing 'cult of sensibility', fuelled by popular novels of the day.

Frye was a real entrepreneur. He advertised his print scheme widely in the London daily press, where the prints were marketed as elegant decoration for a room. They are very high quality, were expensive and sold as a limited edition. He hoped they would appeal to the top-end of the market for 'Fancy' prints, which often showed unknown women in attractive poses. The mezzotint sets are a lasting testament to his talents as a printmaker.

The display will touch upon Frye's fascinating career. As a young man establishing himself as a portrait painter in London in the 1730s he invented and patented a recipe for making porcelain - the first time it had been produced in England - and founded the Bow Porcelain Factory. He managed the factory for fifteen years before the toxic fumes caused illness and forced him to retire.

Thomas Frye did not give titles to any of the prints in this display, and the viewer can only guess who they represent. Some of the figures seem to be frozen in a narrative scene - but what is the story? In association with the London Libraries Development Agency, the National Portrait Gallery held a creative writing workshop to record the responses of the modern viewers to these prints. Participants drawn from the London boroughs of Kensington and Chelsea and Barking and Dagenham created their own fictional narratives for some of Frye's characters. Their responses are displayed next to the works that inspired them. There will also be a board where visitors can record their own creative responses to the works during their visit.