Victorian Photographs by Elliott and Fry 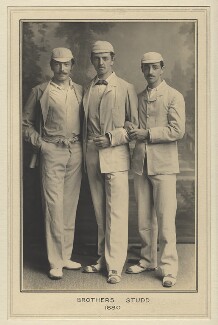 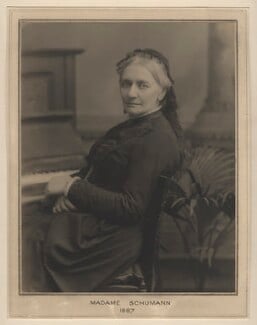 This display of fourteen famous subjects from the 1880s and 1890s celebrates the acquisition of a much larger lost archive of prints found in a provincial saleroom and generously donated to the National Portrait Gallery by John Morton Morris. The full acquisition consisted of over 90 prints, reflecting celebrities in the world of politics, music, theatre, art and sport.

Included in the display are studies of Prime Minister William Gladstone chopping wood and industrialist and politician Joseph Chamberlain shown posed at a desk, pen in hand. Hungarian pianist and composer Franz Liszt and Clara Schumann, pianist and wife of Robert Schumann, are shown sitting at their pianos. Actresses include Mary Anderson, Marion Hood, Lily Hanbury and Jennie Lee in her famous role as 'Jo' in Bleak House. Lord Leighton and Sir John Millais represent the visual arts whilst the Victorian gentleman cricketers, the Studd brothers are wearing their sporting attire.

The firm of Elliott and Fry, founded in 1863 and active until 1963, was one of the most important in the history of studio portraiture in London. Opened by Joseph John Elliott and Clarence Edmund Fry their first premises were a series of studios at 55 Baker Street. H. Baden Pritchard in his 1882 book The Photographic Studios of Europe records his tour of their extensive galleries, where the predominant decoration consisted of important contemporary art works, which relaxed his sitters before their actual photographs were taken. Posed in the naturally lit "glass-room", they could choose from a selection of fifteen painted backgrounds. Sittings were charged at a guinea, which entitled the sitter to eighteen cartes-de-visite (visiting card size) or six of the larger 'cabinet portrait' photographs. This was twice the sum for the best theatre seats and was deemed by many followers of fashion as 'an amusement a la mode.'

The firm employed a variety of operators who took the photographs and these included Francis Henry Hart and Alfred James Philpott in the late Victorian and early Edwardian period. Elliott's son Ernest C. Elliott compiled a fascinating album of 50 British sportsmen; Fifty Leaders of British Sport, published in 1904, in the later history of the firm, eminent photographers such as Walter Benington, Herbert Lambert and William Flower undertook important sittings.

The studio premises and historic archive were destroyed by enemy action in 1942 and these surviving exhibition prints, from before 1914, are the only surviving records of the earlier years. In its centenary year, 1963, the firm was taken over by Bassano to become Bassano and Vandyk. The National Portrait Gallery acquired the main part of that archive in the 1970s, but it is only now that the Elliott and Fry material has re-emerged and through this generous donation has been re-united with the rest of the collection.