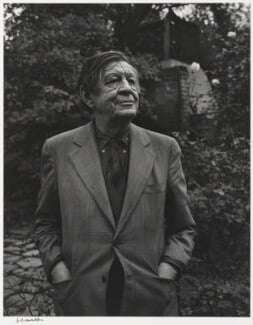 This display marks the centenary of the birth of W.H. Auden, one of the finest and most diverse poets of the twentieth century. The third son of a doctor and a missionary nurse, Wystan Hugh Auden grew up in Solihull and described his early advantages as 'good genes and good education'. A childhood obsession with lead mining machinery meant that he initially hoped to become a mining engineer. He only recognised his true vocation when a school friend asked him casually, 'Tell me, do you write poetry?'

As an undergraduate at Oxford, Auden devoted more time to poetry than to his studies, and his first collection of poems was published privately by fellow student Stephen Spender in 1928. An informal photograph taken by his brother in the same year shows the young poet smoking a pipe with an air of studied nonchalance. By the end of the 1930s, Auden was hailed as the leader of a new group of young writers, and was photographed with Spender and Christopher Isherwood by Howard Coster in 1937.

Auden became a US citizen in 1946, having been captivated by America during a brief trip to New York eight years earlier. Subsequent portraits by American photographers are distinctly glamorous, posing to Irving Penn for Vogue, and for Richard Avedon, strolling through a New York snowstorm.

Cecil Beaton was unique in capturing Auden's transition from youth to old age. He photographed the poet over three decades, each time repeating or reflecting Auden's image. The smooth, youthful face, which Auden unfavourably compared to 'an egg upon a plate', developed into the well-known lined and craggy older visage.