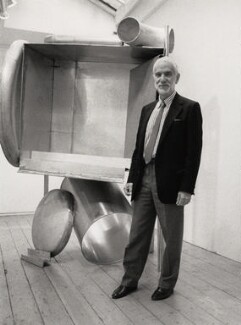 Anthony Caro is widely regarded as Britain's greatest living sculptor. From the early 1960s he has been a major, pioneering figure in the development of abstract sculpture. This is an area in which he continues to innovate, producing sculpture that tests the limits of expression, often using pieces of found scrap steel welded together in arrangements whose appeal is at once cerebral and sensuous.

Since the mid-1980s, Caro's work has proceeded on an ever-broadening front, achieving a remarkable diversity in a range of materials including bronze, lead, ceramic, stainless steel, silver, wood and paper. A little known aspect of his refusal to be tied to a single way of working has been his occasional return to figurative imagery. Preceding his radical breakthrough to abstraction in 1960, the human figure was a principal preoccupation of Caro's art. During the last twenty years, he has returned to this subject, making numerous drawings and sculpture that take an observed model or sitter as their subject. Alongside his purely abstract works, Caro's output has included recognisable subjects such as the nude, as well as occasional portraits. The result has been a remarkable, liberated, fertility of invention, of which Caro commented: 'I was willing to say, come on let's open this up and use it in every way we can without feeling that we shouldn't do this. I felt much more freedom to experiment, freedom to try anything.'

In 1988-9, Caro made four large bronze heads of Sheila, his wife. In March - September 2008, there will be a unique opportunity to view this important group of Caro's portrait sculptures which will be displayed on the Balcony Gallery. In these extraordinary works, Caro's engagement with figurative sculpture is distinguished by new, radical solutions to the issue of resolving observed appearance with an expressive engagement with form and texture. As such, the display brings into view an aspect of Caro's work that to some will appear initially to contradict the very basis on which his reputation rests. At a deeper level, however, Caro's portraits - in common with his abstract sculptures - manifest a vital force of imagination.