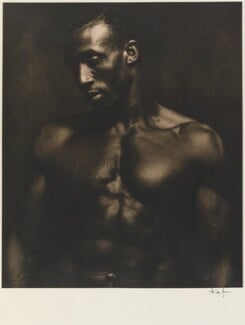 In August 2008, the formal handover of the Olympic flag marks the start of the London 2012 Olympiad. To celebrate the occasion, this display brings together a selection of great British Olympians of the twentieth century. Drawn from the Gallery's Collection, these portraits include well-known sporting stars of recent years, such as Linford Christie, and also figures from an earlier era, including the tennis player, Kitty Godfree.

This year also marks the centenary of London's first Olympic Games in 1908 that took place at the specially built White City stadium in Shepherd's Bush. Three competitors from that historic Olympics are included in this display, alongside a fascinating group of photographs that records the visit of the American Olympic team to the Houses of Parliament during the competition.

Some of the early photographs are formal studio portraits that conceal the sporting achievements of the sitters. The great sprinter Harold Abrahams, winner of a gold medal in the 1924 Paris Olympics, is shown wearing a formal suit, suitable for his other career as a barrister. More recent portraits, such as Alistair Morrison's portrait of Steve Cram sprinting, tend to be more dynamic and focus on the athleticism of the subject.