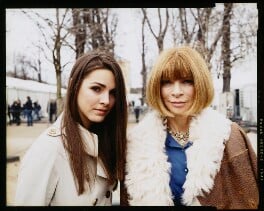 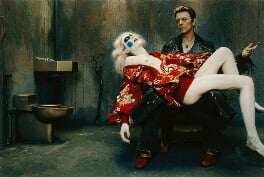 Past display archive
Until 21 September 2008

Fashion portraits of John Galliano, Jude Law and Tilda Swinton by Paolo Roversi together with images of P J Harvey and Kate Moss by Mario Sorrenti, a major work by Steven Klein of David Bowie and a multiple portrait of Kate Moss by Corinne Day form the basis of this display of recently acquired works.

In addition in June 2008 the Gallery was grateful to receive a selection of fashion contacts taken by Anna Bauer of subjects ranging from fashion photographers Juergen Teller and David Sims, designers Luella Bartley and Matthew Williamson, models Agyness Deyn and Lily Cole as well as American Vogue Editor Anna Wintour. During London Fashion Week Bauer was commissioned to photograph behind the scenes for Jenny Dyson's Daily Rubbish newspaper. She continued the project in Paris. Working with a 4x5 camera, Bauer asked over 600 people to pose for one Polaroid print and one colour negative, from which these contact prints were made. A major portfolio of the Polaroids is featured in the September 2008 re-launch issue of Interview magazine.

The Gallery has previously held exhibitions devoted to photographers who have worked extensively in both fashion and portraiture including Cecil Beaton (1968), Helmut Newton (1988), Richard Avedon (1995) and Bruce Weber (1997). It was the groundbreaking exhibition Norman Parkinson: Fifty Years of Portraits and Fashion (1981), which first showed fashion photographs as 'model portraits' beginning a broader consideration of the potential of the fashion photograph as portrait.