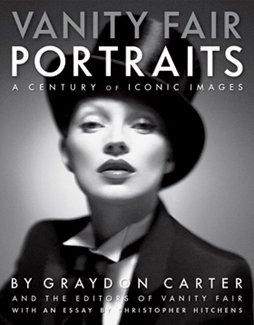 This display marks the publication of a new book by the National Portrait Gallery, that traces the cultural history of the twentieth century and its leading personalities through the pages of a magazine.

The book, Vanity Fair Portraits: A Century of Iconic Images, celebrates ninety-five years of photographic history, from Berenice Abbott and Cecil Beaton to Mario Testino and Tim Walker. Bringing together the work of over eighty photographers, and juxtaposing Jazz Age luminaries with modern icons, the book encompasses the two incarnations of the magazine. The first era - from 1913 to 1936 - is dominated by figures from the arts, film and world affairs, including Pablo Picasso, Amelia Earhart, and Katharine Hepburn. The second era - from the reincarnation of Vanity Fair in 1983 up to the present day - includes Hollywood stars as well as writers, athletes and leaders of business and politics, with portraits of Robert De Niro, Arthur Miller, Madonna and Rupert Murdoch among others.

With more than 300 classic portraits commissioned by the magazine, a selection of which are shown here, Vanity Fair Portraits offers an overview of fame, talent and glamour since the early twentieth century.

A special slipcased edition of the book is available exclusively from National Portrait Gallery shops while stocks last.