Men of the day: Caricatures from Vanity Fair 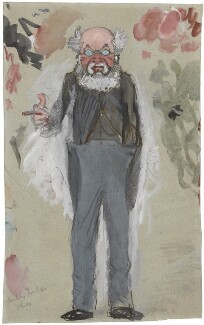 Past display archive
Until 31 August 2008

Complementing the exhibition Vanity Fair Portraits: Photographs 1913 - 2008, this display of original watercolour drawings celebrates the nineteenth-century forerunner of the modern magazine. From 1868 to 1913, the British weekly review, Vanity Fair, cast a satirical eye over contemporary society and politics. The most popular feature was a full-page colour caricature of a leading figure of the day. Over 2300 of these caricatures were published between 1869 and 1914. The watercolours in this display were commissioned by the magazine to be reproduced as colour prints.

The distinguished and international list of artists employed by Vanity Fair includes Carlo Pellegrini, Sir Leslie Ward, James Tissot and Baron Melchiorre Delfico. The trademark Vanity Fair style became an institution and shaped modern British caricature. To appear in Vanity Fair came to be seen as a public honour and a mark of distinction. These caricatures provide a unique, affectionately satirical chronicle of British Victorian and Edwardian society.