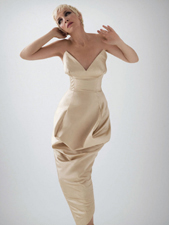 Historically, the term 'muse' refers to the Greek goddesses who represent the arts and inspire the processes of creation. The twenty-one subjects chosen as Modern Muses are a selection of outstanding women from different fields of achievement including the arts, charities and business photographed at differing points in their careers.

The selection of sitters was made by BlackBerry® and the National Portrait Gallery together with the photographer, Bryan Adams.

Canadian-born Adams has established himself as a leading photographer after many years as a successful rock singer and recording artist. He published a book of portrait photography for Calvin Klein called American Women (2005) and has had his work published in magazines such as i-D, British Vogue and Vanity Fair.

The Modern Muses portraits were commissioned by BlackBerry, sponsors of the National Portrait Gallery exhibition, Brilliant Women: 18th-Century Bluestockings (13 March-15 June 2008). They are a fitting contemporary adjunct to the independent minded, creative professionals celebrated in the portraits created over two centuries earlier.